What You See Depends on Karma 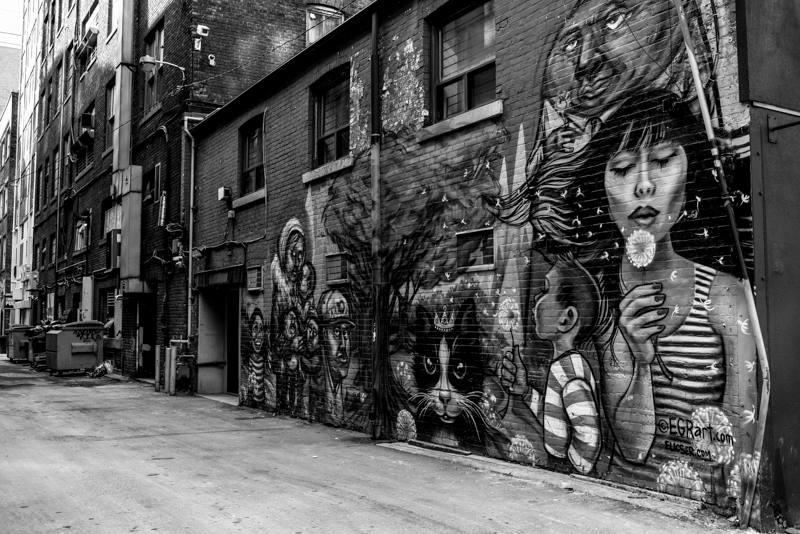 In the photo above, there is a contrast between the garbage that is accumulating in the alley to the side of the building and the painting that someone has made on the very same wall.

Obviously the angle at which the picture is taken determines what image will dominate the photo, whether it will present a positive or a negative image of urban life. The viewer’s perspective matters as well because some people don’t like street art. Still others prefer color to monochrome.

So there is an interplay here between the technical aspects of the photograph, its content and the viewer. Now I’ve added another element to the mix by commenting on it. So here we have a number of factors coming together to determine an outcome, whether you, the viewer, sees and likes the photo and the content of those factors is not trivial. It matters.

Another way of looking at this progression is as a karmic chain of causes and effects. If I didn’t take the photo at all there could be no reaction either positive or negative. So the action of taking the photo is a cause of you seeing it.

This all sounds ridiculously obvious but so many of us fail to take this simple reality into account in our daily actions and decisions. The actions we decide to take are of such critical importance to whether we are happy or not and yet, we so often act heedlessly.

Heedlessness is by definition action due to the force of habit rather than careful attention. In other word, the failure is not due to a lack of intelligence; it is a failure to turn one’s mind to the question at all. The point of insight meditation is to train the mind to move those actions from the realm of reflex to the realm of conscious decision. That makes us much more likely to achieve the happiness and satisfaction we want.